Hear from our experts on Everything LED Lighting
Back TO Blog 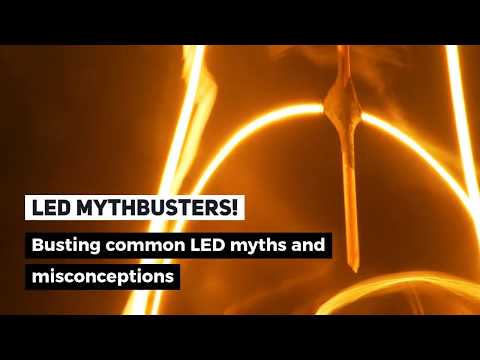 Despite the ever-growing LED market, there is still a lot of misinformation about LEDs out there. In the past, we have covered a few LED myths and today the LED mythbusters are back at it! You can read the first blog here. Today we are going to take a look at LED myths surrounding lifespan, color temperature, and dimming capabilities.

1. LEDs Flicker and Blink When They Die

If you are accustomed to sitting under fluorescent and incandescent lighting, you will be familiar with their flickering. This is usually a sign the bulb has reached the end of its life. While LED fluorescent lighting replacements look similar to their counterparts, they are not prone to flickering and going out.

LEDs have a lifespan rated at an average of 50,000 hours and tend to dim, rather than flicker when they reach the end of the line. If you do have LEDs installed in place of fluorescents and they begin flickering, it is most likely a ballast issue.

2. LEDs Are Only Bright, White/Blue Light

LEDs are often associated with bright white or blue lights. Some people appreciate the modern, clean lighting look, but others want a warmer, cozier lighting environment. LEDs are capable of providing both. LEDs come in a wide range of color temperatures, and if you are looking to save money but keep your home’s lighting warm and inviting, LEDs have you covered!

It is true to say that LEDs cannot be installed to dim on an existing dimmer system. That is because LEDs require different technology. However, they are able to dim none-the-less! Traditional lighting is dimmed by sending less power to the light’s filament. LEDs dim due to LED chips and arrays turning on and off in rapid succession. It is important to mention to your lighting consultants that you want dimmable LEDs from the beginning, as they are slightly different from non-dimming LED bulbs!

Get Your LEDs from Sitler’s!

Sitler’s has all of your LED needs covered, whether it is for dimmable LEDs, warm and cool tone color temperatures or help to install LED fluorescent replacement lamps while bypassing the ballasts. Give a lighting consultant a call today at (319)-519-0039 or send in a request!

LET'S GET IN TOUCH

We Want To Hear From You
Email Us